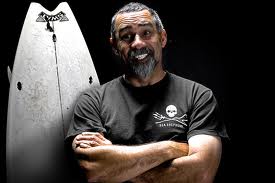 In the surfing world, Maurice Cole is a legendary surfboard shaper from Australia. With his positive view on life, he has worked for decades to gain his place among some of the best shapers in the world. In fact, he doesn’t just shape great boards for surfers – he shapes incredible boards for some of the top surfers in the world. Just a few of the world’s top surfers that have sought out boards from Cole include Taj Burrow, Tom Curren, Kelly Slater and Mark Occhilupo. In the surfboard industry, Maurice Cole’s integrity, collaboration and innovation have made him a shaper that stands head and shoulders above many of the other surfboard shapers in the business.

A Bit of History

Maurice Cole was born in Australia in 1954, quickly moving from his birthplace of Terang, Victoria to Warnamboll to be with his adopted family. When he was only 12, he began to hit the waves, winning a mere five years later at the Victoria State Titles in 1972. Surfing turned into a passion and soon Cole was beginning to shape boards. He wasn’t always happy with this surfing equipment, which led him to watch shapers Jim Pollock and Donny Alcroft, soon deciding that he too could shape boards. Within a week after shaping his very first board, it sold, beginning the career of this incredible surfboard shaper. While he got his start at Rip Curl, he later moved on to Speaky’s where he began making greater profits from his boards.

When Cole moved to France, he met Tom Curren, which started a partnership that wiould lead to a huge change in surfboard design at the time. While Maurice Cole shaped boards for Tom Curren to use, Curren would go on to ride those boards to win a 3rd world title after he came out of retirement. Kelly slater also was riding a board shaped by Cole when he got his very first world title back in 1983.

Today, Cole continues to work as a surfboard shaper, working at his own factory, “Chateau El Chooko.” He enjoys putting out incredible, cutting edge boards and of course, spends plenty of time hitting the waves as well. For Cole, surfing and shaping go together and he insists that he could not have one without the other. With more business than ever, it doesn’t appear that Cole plans to retire anytime soon.

The boards shaped by Maurice Cole continue to be some of the best, cutting edge boards surfers will find. His boards are known for their great release, ultra concaves and excellent fin systems, ensuring surfers a fast ride without having to worry about spinning out. His designs also focus on strength, using epoxy resin to give boards a long life.